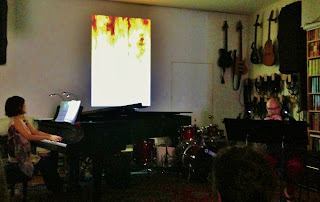 On this hot and muggy first Sunday of the summer I took myself across the Williamsburg Bridge to Lower East Side to cool down with contemporary music. As I was early, I took a walk around the block. On the next block on Orchard Street there was a street fair with many stalls selling food and other stuff. All of the many bars had their fronts open and thirsty customers were sitting with their beer mugs observing the procession of scantily clad denizens on the street.

At Spectrum on Ludlow Street the atmosphere was much more subdued. A couple of dozen people had gathered in the long and dark living room where a stage was established at the far end. The side walls were lined with bookshelves. On the right side, they were filled with books; the left side was covered by thousands of CDs. I sat down on a comfortable black sofa next to the CDs and took a long sip of the aloe mango juice I had bought on the street. The occasion was a concert—Tokyo to New York—displaying new music by Japanese and American composers. The performance featured music by more than 20 contemporary composers ranging in age from early-20s to mid-80s. There were three musicians—Thomas Piercy, Mika Tanaka and Elizabeth Brown—performing on Western and Japanese instruments. The secret behind the darkness in the room turned out to be that the music was combined with a show of photographs arranged by Christina Boers projected on the back wall.

The first segment of the concert started with a solo piece ‘Mienai Sakebigoe’ on hichiriki written and performed by Piercy. This moved on to a piece by Masatora Goya, ‘Toro Nagashi’, which had Tanaka join the hichriki, playing delicate ornaments on the piano. Hichiriki, a Japanese double reed instrument used traditionally in ancient gagaku court music, has a flexible pitch and a nasal sound vaguely reminiscent of oboe. With Piercy switching to clarinet, the duo performed a U.S. premier of a piece by Akira Uchida, the soothing and hauntingly beautiful ‘New Moon’. This part of the concert ended with a hectic piece by Katsuhiro Oguri called ‘Movement 2012’ (also a U.S. premier, like several of the tunes following), depicting the chaos of New York City traffic. The photographs that accompanied it were on the same topic. The first theme of the piece culminated in a climax with a long high tone from the clarinet matching a photograph of a black man showing an equally piercing middle finger. This launched Tanaka into an atonal boogie on the piano, which appealed to my jazz sensibilities.

After the duo finished their frantic performance, Elizabeth Brown followed with a shakuhachi solo from her own Isle Royale suite. This one was ‘Loons’, a serene piece of beautiful work for the vertical bamboo flute. 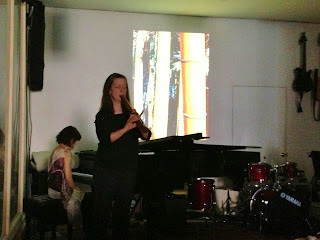 The second segment of the concert featured eleven short pieces by as many composers drawn from a series of more than 50 commissioned one-minute works under the title ‘Nihon no Shiten’. The composers were Armando Ayala, Greg Bartholomew, John Bilotta, Andy Cohen, Douglas DaSilva, Andrew Davis, Jim Fox, Michael Frazier, Nina Sinakova, Daniel J. Thompson and David Wolfson. They varied between lyrical and quirky.

Another interlude followed with Brown playing another part of her bird-themed suite, ‘Black-throated blue warbler’. I have heard her play parts of the suite before in an earlier concert and can appreciate the beauty of the nature-inspired music that utilizes the unique timbre of the bamboo. The shakuhachi is a difficult instrument (Elizabeth and I talked about it briefly before the concert agreeing that it made the Western flute feel simple and straightforward) but she has established a beautiful sound and command of the instrument.

The final part of the concert started with Mika Tanaka playing her own solo composition, ‘In the Garden’, a lovely but not a radical tune. Then followed five duo pieces:  ‘YUU’ by Yohei Kurihara, ‘Sketch from Japan’ by Kazushi Iwaoka, ‘You’ by Mieko Ishii, ‘Old Men Waltz’ by Yoshihiko Banno, and ‘Space’ by Kyoko Yamaguchi. I particularly enjoyed Iwaoka’s ‘Sketch’, which utilized alternately Japanese and Western scales seamlessly contrasting the two modes. ‘Old Men Waltz’, a melancholy atmospheric piece was to me one of the high points of the afternoon. Its theme referred to the inevitability of old men waltzing away from the scene, making way to younger men; an inevitability understood by both the young and the old.

The final piece of the concert, ‘Amalgam – A’ by Hifumi Shimoyama was very interesting because it brought together shakuhachi, clarinet and piano producing very unique, surprising tonalities. Piercy explained how he had visited Shimoyama at his home in Tokyo. The composer lives in a modern high rise. When you enter his apartment, to the left is a highly modern, stylish living space, while on the right you enter into a traditional Japanese abode. This dichotomy is also evident in his music.

Meanwhile, on the sweltering street the Lower East Side was alive. Although the sun was not yet setting, there were lines to venues with live music of a different variety as I headed towards the subway on Delancey. I was glad that I had cooled off the afternoon at the Spectrum where I had been both stimulated and calmed down.
Posted by Juha Uitto at 6:33 PM

I am able to share the heat, the air, music, mixture of culture, spirit, creativity thanks to this natural description of yours being so far from the place.